It's such a cool tank and yes, you definitely need premium ammo. Makes a huge difference against tier VII. I always try to play games in each tank to get a good reading on it, but it really seems odd to have every game just about against the Tier VII when I started using it. Especially as I was pretty much stock standard at the time. I have no desire to interact with the type of trolls who inhabit this forum. HadronPrime, on 10 October - Community Forum Software by IP.

This Is Why The KV-1S is Considered Overpowered.

O well maybe it was just the day, time will tell. ShirouRabbit 2 Posted 09 September - At the moment the KV-1 is probably still riding a surge in popularity due to the release of the KV The matchmaking will be trying to make balanced teams with more heavy tanks than usual, so it will be spreading the KV-1 tanks around resulting in more higher higher tier matches. Later today I expect some of the swarm will switch off to the new shiny thing, British TDs, and the influx of players starting a new line will shift the balance away from the KV-1, giving a different matchmaking experience.

I expect briefly you will see an increase in matches where you are middle or even top tier. They need to spread all the stronk KV-1's out!


SpawnIscariot 6 Posted 12 September - Despite what some people will have you believe MM does not take tank types, let alone specific tanks, into consideration when deciding on team makeup. The no-damage penetrations will be you hitting modules, usually tracks. The KV-1 ZiS-5 plays like a standard heavy tank, with heavy armour able to soak up shells while angled and a decent 76 mm gun to fire back.

While mobility is not the greatest, it is sufficient to get up to the front lines in time for the battle.

Compared to its predecessors, the KV-1 ZiS-5 serves as a continuation rather than a big improvement, with the ZiS-5 gun the KV-1S had while sacrificing mobility for more armour. This tank is very similar to its predecessors, but mounts the same gun of the T sharing its ability to fire APCR shells. The player should feel at home once going through the KV-1 L , and while not as fast as the KV-1S , it maintains more armour all-around. The gun may be lacking on penetration unless using APCR shells, its velocity is poor makes it harder to aim in Realistic Battles , but will do plenty of damage once penetrated and reloads quite quickly.

The armour is outstanding when angled. With extra 25mm spaced armour at the front of the hull results in total of over mm of armour. The tank can take a lot of damage from lower ranks and still survive the battle. The turret remains vulnerable however, but turret ring is reinforced, which means that it's harder to jam the turret. 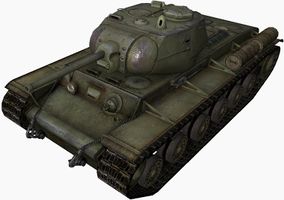 Careful usage of the KV-1 ZiS-5 is needed due to its matchmaking compared to its predecessor. Its only distinctive perk is the armour, with the 76 mm gun already serving in the T and KV-1S while mobility is only subpar.

The matchmaking puts the KV-1 ZiS-5 against more powerful opponents in an uptier, which one could find themselves unable to penetrate from the front. Enemies at the same time will be able to penetrate the KV-1 easily through common weak points in the last two iteration, flat on the side hull armour or through the turret front. However, the KV-1 can still be a significant factor in the battlefield if played in the right circumstance.

The boxy shape of the overall tank encourages angling, which can make the hull armour nigh-invulnerable by its contemporary guns, so do that. The biggest concern in survivability then will be the turret armour, and so try to minimize the risk of a straight-on hit onto the turret front by any means necessary, like the "turret wobble.

In a downtier or fighting its battle rating contemporaries, the KV-1 ZiS-5 can handle its ground. In these situations, the KV-1 can serve as the front-line assault tank.

Take the front lines with the teammates and serve as a bullet sponge while angling. Allow the enemies to be concerned about the KV-1 presence and fire at it while the KV-1 should worry about staying alive. If enemies are not concerned about the KV-1 ZiS-5, then make them concerned with the 76 mm gun. With teammates, the KV-1 ZiS-5 can have enough supporting fire so that enemy tanks do not have an opportunity to outmaneuvre the KV-1 to hit weak points. Thus, outside of tank destroyers and the typical high-velocity 75 mm guns, the KV-1 can be a menance to the enemy team. In an uptier however, as mentioned the KV-1 ZiS-5 will be more easily destroyed by the tougher enemies and guns.

In these situations, the tactic of being an assault tank or a bullet sponge will be short-lived as a well-placed round will penetrate through the armour, plus the 76 mm may no longer be sufficient in penetration outside of the APCR ammunition. In this new position, act more as a support tank. Follow behind more capable allied tanks and assist them by bringing another gun into the equation. If they are occupied with one enemy in front, maneuver around while that enemy is concentrated on the ally and force them to split their combat vision.

If an enemy tank is trying to flank the ally, then fire at them to throw them of their course of action by having to worry about the KV-1 as well. Another way to use the KV-1 in an uptier is to cover flanks and set up fire zones. While the KV-1's armour in an uptier is not sufficient for a straight up fight, move along the flanks to engage on more mobile, but less armoured vehicles like light tanks trying to get around. If in a good position, set up a fire zone to watch for enemy tanks moving carelessly around, unaware of the KV-1 presence.

In these cases, wait for the right moment to strike towards their side armour with a APHE round to quickly devastate their interior. Thus, the KV-1 can still be a major player in shutting down enemy movements in the right position, just ensure the lack of gun depression is taken account of in the firing angles. In short, a more diverse play style is needed to accommodate the enemies the KV-1 ZiS-5 can face that its predecessors will not.

Since the KV-1 ZiS-5 armament hasn't drastically improved while the potential opponent pool has, there will be times when the KV-1 ZiS-5 be facing enemies that cannot be penetrated from the front. The poor armour, large profile, and cramped interior means a penetrating round by any tank could be lethal. High battle rating vehicles like the Tiger I heavy tank have guns able to defeat the KV-1 ZiS-5 with ease, while the 76 mm gun is nigh useless at ranges.

However, in close ranges towards flat angled armour, the 76 mm BRP APCR ammunition can penetrate through flat armour, especially that of the Tiger I while under meters. The KV-1 ZiS-5 armour is still relatively strong at the hull, taking the base armour of the original KV-1 L with extra armour added on. While the mobility is subpar and firepower is the same compared to the more ubiquitous Soviet T medium tank, they can still be a threat if ignored.

If facing an unangled KV-1 face-on, the front hull plate is still a popular place to attack on with a high-velocity anti-tank weapon.