These soundtrack sets are unique for each map in the game. The new Garage sounds including the music theme played at the battle queue screen have been added. The music and visuals of the login screen have been reworked. Ambient Sounds Completely reworked the ambient sounds of each map. The ambient sounds are rich and natural depending on the map region. Sounds of the player's vehicle shots, explosions, sound of tracks, etc.

The same sound will sound differently in mountains, forest, village, urban area, open field, etc. The entire sound environment has also been designed for the 5. Reworked almost all sounds of destructible objects after the release of the new destruction physics. Reworked the shell sounds. Each of the four shell types will differ both visually and in sound, which will provide more information to players. Notification in Battle Added new notifications displayed when shooting at enemy vehicles for Random Battles and Bootcamp.

Bootcamp remains available to players. Bootcamp mission 2 and 5 have been made easier. Bootcamp has been completely reworked into HD. The previous Bootcamp Garage has been replaced with a new one. Battle loading screens have been reworked. Made minor changes to the Bootcamp difficulty.

Improved behavior of AI-driven vehicles. Changes to the technical characteristics of the following vehicles Object U. Added the attributes of the new nation Italy. Added the following vehicle for testing by Supertest players: Progetto M35 mod 46 Improvements In case of insufficient amount of Bonds, the cost of the Improved equipment is not red, if similar standard equipment has already been mounted. Fixed the issue that prevented players from retraining the crew between Premium vehicles.

Fixed the issue when the team list in the Stronghold mode was not updated upon clicking the Update button. Fixed the issue that allowed switching the nations in the Tech Tree, when completing the Bootcamp. Fixed the issue of the missing discount tooltip when purchasing Premium Account time.

Removed camouflage from some tank destroyers that cannot be removed by players upon selecting another camouflage pattern. Fixed the timer of crew recovery for gold. Fixed the issue when all crew-related interactions in the Barracks and in vehicles were locked, if at least one vehicle was in battle. Fixed the issue of double discount indication, if the sold item has a double cost in gold and credits. Fixed the issue that kept Platoon members from selecting a vehicle, if the Platoon commander had confirmed readiness.

Fixed the brightness of camouflage on some vehicles. Known Issues Hit decals are displayed improperly sometimes. Loading of some maps takes longer than expected. Some visual issues when "rewinding" a replay. Vehicle loading before the battle countdown may take much time. Issues related to object details occur at the Minimum and Low graphics quality when rotating the camera.

Some large structures may disappear on the Ruinberg map at the Minimum graphics quality. Some issues related to displaying of shadows that large objects cast. Gamma Settings do not work properly on some computers at the Standard graphics. Jerking tracks when driving over obstacles. The camera can get inside some objects in the postmortem mode. The volume of the Airstrike sounds does not depend on the actual distance to the player's vehicle.


Half-dynamic shadows keep being displayed after disabling grass. A black screen is displayed when loading to a battle if the player's vehicle is not completely loaded in the Garage after leaving a training room. Some objects do not get destroyed properly according to the Havok technology when hit with an armor-piercing shell. When watching a battle replay, some shell tracers are displayed improperly. Improper display of the terrain under vehicle tracks.

The colors of the penetration indicator are sometimes wrong. The red green outline is displayed when aiming at a point beyond the vehicle silhouette. The camera can get inside some vehicles. The music of the Battle Results is played louder when switching to the Research window.

Search for the things you need!

After repairing a track in battle, the stun indicator is reset and the countdown starts anew. Concealment of a vehicle with unique Camouflage is displayed without the bonus to Camouflage in the Garage; however, the effect of Camouflage is actually active. An enemy vehicle overturned by the player will not count towards the total number of vehicles destroyed by the player. The recruiter's Recruiting Office does not display the recruits and reservists that they invited if the recruiter's account is restored to a state, preceding the moment when recruits accepted the invitation.

In some cases, when moving the mouse cursor fast around a vehicle, the camera can suddenly change its location when in the Trajectory Aim. The battle type selector will consider the history of the player's previous battles. The Grand Battles will not come in a succession. Improvements to the Vehicle Customization The lower panel of the customization interface will contain the Applied sign for elements that are applied to the vehicle.

Removed the display of the vehicle ranks from the vehicle panel; the vehicle ranks were replaced with rank points in the vehicle statistics. Reworked the progress interface of vehicle ranks: Revised the Leaderboard interface for the Ranked Battle mode. Improvements to the Stronghold Mode In Skirmishes and Advances, the battle room commander can select a player who will use the Combat Reserves Airstrike and Artillery Strike ; it can be any player of the detachment, including the legionnaires.

The player becomes the Forward Observer and uses the reserves in battle. 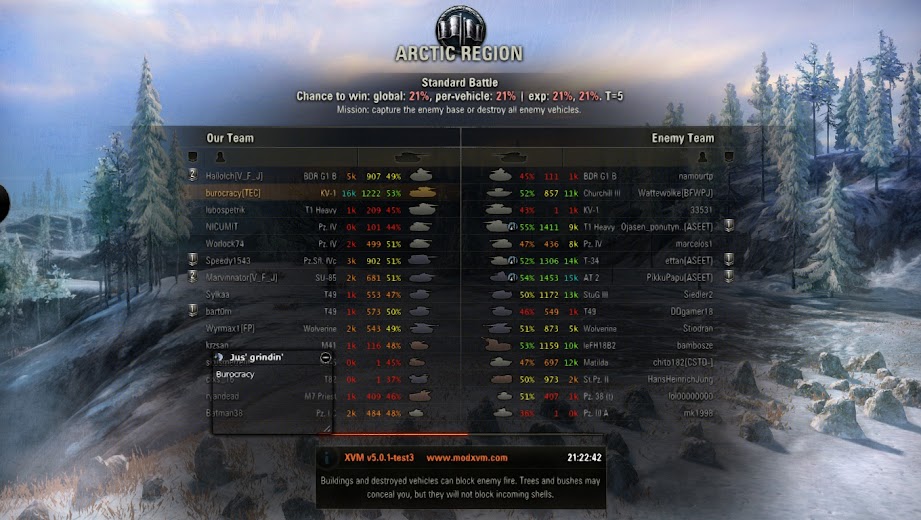