It is very similar to a KV carrying its , except that the KV has notably better rate of fire and gun handling than the KV The KV is oddly similar to what the KV-1S was ages ago; a surprisingly fast and mobile heavy with a terrifying mm gun, trading a slightly weaker armor profile for the privilege of massive alpha damage. While the KV is still a terror to any unfortunate tier 5 vehicle that encounters it, it is far less powerful when placed in a tier 9 matchup. The KV's hull is identical to the KV and inherits that vehicle's weakness, in the form of a flat and thin upper plate that is easy to hit.

The 75mm plate can only present roughly mm of armor when angled, which is insufficient in a tier 7 battle let alone a tier 9 one. The turret front also suffers from this problem, as while the turret is well rounded, the gun mantlet does not share any coverage with the turret's actual armor. This plus its large cupola demand that the KV be played in a supporting role rather than a brawling one.

Lacking the protection to deflect higher-tier enemy fire, it must use its superior mobility to move around enemies and punish them with points of alpha damage per shot, pulling back to reload and punish enemies again.

In this way KV is less of a pure heavy tank and more like an oversized medium, thanks to its better-than-average power ratio, traverses, and terrain resistances for a Soviet heavy. Flanking shots also mean that its mediocre penetration is not as much of an issue against weaker side or rear armor.

As a result, this tank is something of a glass cannon and must be supported by its teammates, allowing larger or more resilient allies to absorb shots while it rolls forward and blasts a hole in the enemy. While its gun handling is better than its other peers using a gun, it is still breathtakingly mediocre compared to other members of its tier, requiring care to effectively use its high alpha damage to its advantage. Equip a gun rammer as soon as possible, as it saves 1. Vents can bring the reload down to just over 11 seconds and provide a DPM of around , while vents plus a gun laying drive will bring the aim time down from a lengthy 3.

A more support and survival oriented player may elect to equip a toolbox or spall liner, but this choice is uncommon and most KVs encountered will be set up to support the gun. Investment in the Repairs crew skill is highly recommended, as a major weakness of the tank is its tracks. 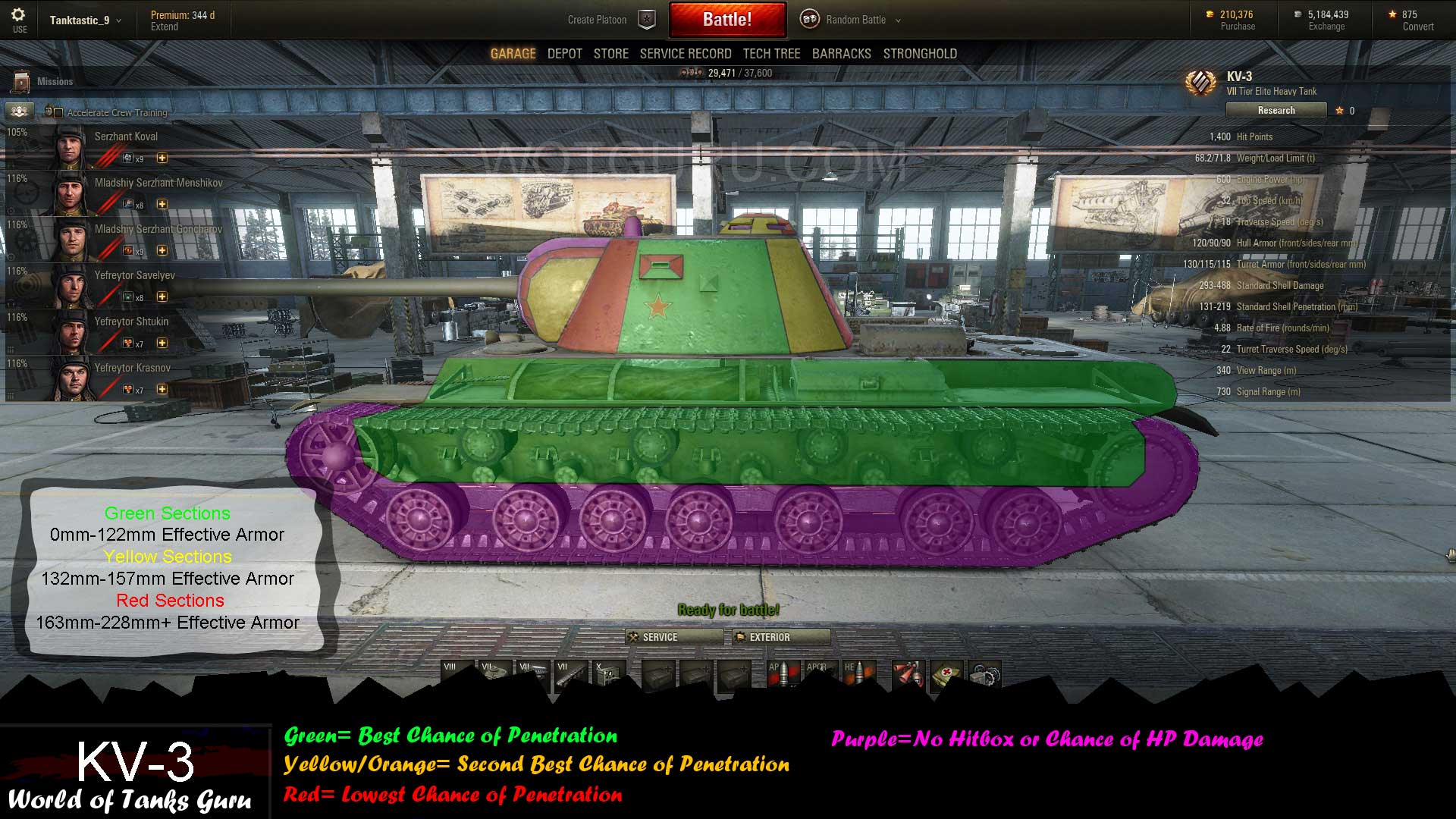 The tracks are weaker and easily broken compared to other heavies in its tier, as it uses the KV tracks instead of the tougher IS tracks. Since this tank relies on its mobility to survive, it cannot afford to remain exposed for long. Taken all together, the KV is not a proper heavy tank, in spite of its classification and use of a KV hull.

It takes one tank from the queue and looks at his tier. For example it is IS - russian heavy with tier 7. The matchmaker takes the corresponding line from the table below and sees that the IS has battle tiers from 7 till 9. Randomly is the tier for battle selected. In our example let it be 8 from 7 to 9 incl. The matchmaker takes tanks from queue, which can participate in tier 8 battles see column number 8 in the table and puts them in 2 teams. In our battle we can face Tiger II and for example M6 both can participate in tier 8 battles.


There are 12 battle tiers. In the tier 12 battles you will have only tanks from 10 tier and some light scouts from lower tiers. Some players are confusing battle tiers with tank tiers. This values must not be the same.


The matchmaker resolves battle tier on the basis of table below. It doesn't try to weigh the tank tiers in both teams. Some tanks have exclusive battle tiers, you can find the in lower half of a table.

Most premium tanks have lowered battle tiers. Been playing this game since beta days and yes, the complaints are often the same. But I think they are also well deserved. It simply doesn't have to be that way: Using XVM colors, blue and purple players should be fighting each other, not green and yellow players who should be fighting each other , etc. I just don't think devs are interested in leveling the playing field because it doesn't bring in as much money. After years of playing the game, I've come to the conclusion that unlike expectation that only a player's skills determines the fate of battle, there are in fact multiple parameters that affect skills outside of a player's control.

Periods of 1 shot kills or ammo racks or continuous losses or wins Those are not player controlled but MM manipulated.

For example, the higher the win rate of a tank the more chances of getting into winning battles. It is one reason high stats players play low tiers in platoons: Finally, every so often the devs make bigger tweaks than others and change the game's playing dynamics, forcing players to adjust their play style. More recently they increased track repair time which makes it very difficult to recover against 2 tanks or auto-loaders when tracked. Or they modify a tank's parameter.